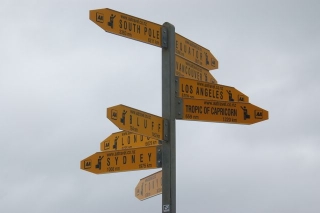 We spent a glorious three weeks in New Zealand in 2006, visiting Maria’s parents and exploring the two islands with our dear friends Susan and Ryan.

Week one was spent on the north island with Birgitta and Chet, staying at Matanui – their house in Keri Keri and being tourists.

Weeks two and three were spent on board the Spaceship Shrooms, with Susan and Ryan, going where the weather blew us.