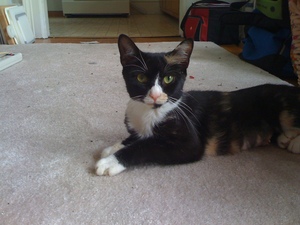 We can officially claim to be settled into NEPA now.  Both Ted and I are hard at work at our new jobs aand things at home become more like home every day.  As a result of feeling this way, we went and adopted a little itty bitty kitty on Saturday.

Lila is a small, 2-year old cat that we found at the SPCA.  She’s had a rough life.  Recently she gave birth to 3 kittens and then played nursemaid to 4 others.  At the time of her adoption, she still has milk in her teats!  And all this she’d done at a mere 5.5 lbs!  She is the smallest cat I have ever seen.  Like most cats that come from the SPCA she’s has a bit of an upper respiratory infection but this too will pass.  She’s the sweetest cat you’ve ever met too … and very easy going.

Burrnadette is not taking it as well.  She’s still adjusting to all the changes so this has thrown her for a loop.  The good news is that there was no blood at initial meeting so it’s doubtful that there will be trouble.  The first day she would not come out from under the bed.  Today she’s coming out to smell the smells and explore a bit more.  This good.

More pictures can be found on smugmug.